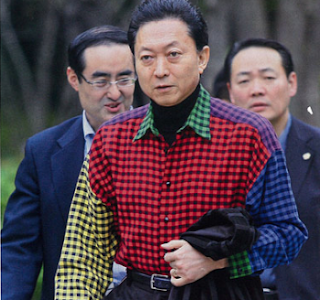 Let me first state unequivocally that I have been bros with Japan Prime Minister Yukio Hatoyama since we first did New York City's No Pants Subway Ride together back in 2007.

And truth be told, I thought that a studded leather codpiece that fateful morning was a bold stroke for Yuki, to say the least.  It certainly put my Señor Elephante number to shame.

But having shared so many laughs and loves with another person--even if he's the boss of a leading Asian democracy--does not forbid Denny from playing the honesty card.

And I'm pained to say that Peter Lord, as he's known in some Phoenix hipster circles, has lost his way in the fashion woods, and I don't see any bread crumbs, love.

Yukio, Bubby, you need to start thinking of those you're hurting. Repent, my son, by humbly laying your hideous apocalypse of a garment on the bare ground and engulfing it in a welcome conflagration of atonement.

Labels: Andy Garcia Wants His Hairpiece Back, Bile Everywhere, Fuck You Hilfiger, Promote Synergy, Zup With The Dickface to His Left?

Someone I knew in college actually did the no pants subway ride. They said was really cold, but that the clothed were really cool about it. Have to try it myself someday but not with a leather codpiece *cough*

I have thought about doing it, but I'm scared--I get cold easily!

Fear not. The greater good will be served.