From The Bag Of Tricks: The Birth Of Our Bastard Son Was A Day Of My Life 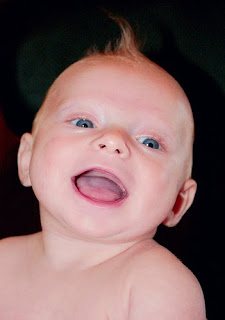 When I found out last year that you were with child I reacted the way you'd expect a first time father who had carelessly impregnated a happily-married, interior decorator wife and mother would--I celebrated with a night of mangy strippers, $2 highballs and mid-grade recreational Angel Dust with a few former frat brothers and a too-eager-to-please second alternate from my racquetball league named Sanjay.

And, I must admit, not getting to know my son has been a magnificent, intensely impersonal experience.  A watershed, coming of age crossroads for a life that had theretofore been all too consumed with pomade, dwarf-smut, rhinestones and emotional ships in bottles.

When I don't hold him close, I wonder aloud what kind of a man that calls himself his father he has. And whether my boy is getting the same special brand of love and adoration that I have no business or predisposition to provide him with. My mind swims.

Will he find his way in life without a role model such as I to teach him the proper manner to spring the Popcorn Trick on a lucky, yet unsuspecting, young lass?

Is it likely that he will understand that raging kleptomania is a sacred right of passage into the elite, secret society that is adulthood?

Will he one day realize the complete and utter sense of relief that I feel each time I look in my spare bedroom and see a pair of curvy 19 year old Danish Au Pairs lounging where his sweet crib might have been?

The answer is surely nay to all questions.  But I still want him to know someday that his father loves him so very much, and has endured the sad smorgasbord of emotional tribulation that comes with a cowardly denial of paternity, followed by a 12 week Sex Tour of Mazatlan.

And to his sweet, virtuous Mother I simply say thank you--for raising Denny's boy exactly the way that you've wanted to, devoid of even a modicum of parental influence from me above my chromosomal donation that resulted from a borderline anonymous, six minute rut-fest in your Buick after an Uncle Cracker show.

I just hope that I can live up to the lofty filial standards that you have surely set for me.  Time will tell.

Labels: Ain't Mine, Don't do the Time if you Only Have to do the Crime, I Hate Uncle Cracker now, Jerry Said You Couldn't Get a Girl Pregnant if you did it Standing up

Whether this is fictitious or (sadly) real, I can't help but find it in my evil heart the desire to laugh at such a deplorable situation. Maybe it was through your wording or the fact that this is SO typically you (no offense). Oh Jerry...

Denny Dance can wander into the allegorical on occasion.

Can I join you in Mazatlan?

How come Denny leaves anonymous comments on his own site?

It's not your fault, Denny.

ps. Does your son have a brother? I'm asking for a friend.

@Bear: It was a stylistic choice in response to Vodka's comment. Perhaps a rash, impulsive call.

@B: At least two half-sibs. Perhaps more on the way.

Oh Denny... stop spilling your unwanted seeds! You spread them like you're in a cotton plantation! There's no demand for such commodities!

Check the Chicago Mercantile Exchange before you make such sweeping statements.

Wow, I am like everyone else, not sure how to take what i just read. If its real..thats kind of screwed up..a man should sack up and take care of his children. If its sarcasm and a joke..well i bought it hook line and sinker....but i am way interested in the 2 week sex tour in mexico...damn i knew i liked you...zman sends

@Z: Have a look around some of my last 13 months of posts and run the piece through that filter. You'll have your answer.

Love in the Dumps said...

Denny, do your posts have their own channel on Jet Blue yet? I know people.

^ I agree with Love in the Dumps, this banter could make ANY flight a luxury air-cruise of hilarity. So when you planning your first fishing trip with Bryan?

Denny got a Jet Blue one time in the back room of a Phoenix Tannery.

I see that baby Denny is rocking a faux-hawk and has no teeth. Much, I'm certain, like Denny Sr. will be within the next 10 years. Sexxxy.

How can people question the veracity of this story? They just don't know you like I do, Double D.

Ca you get me some mid grade recreational angel dust Denny?

"denny dance can wander into the allegorical at times..."

denny, there is a magical land.

it is called Allegoria.

and you are king.

I wish I were your bastard child so half of me could have shot out of your penis at mind-boggling speed.

@Good Nurse: Yes. As long as you send the photos I asked for on my birthday.

@Blunty: I know where the allegoria is but I need Real Doll to demonstrate.
(My back-up joke had something to do with Tipper Gore.)

@Sarah: That is the most hauntingly beautiful thing anyone has said to me today.

I was in a similar position following some post 9/11 sex, except that the mother wanted me in the life of my daughter (at least financially at first). I now have custody one weekend a month and two weeks during the summer. Her mother isn't in the Army reserves though...

Thank you for this, Denny.

Ben, Bryan, or aka The Spawn of my Denny Laced Chunny

@Babymomma: U still with that Aerosmith roadie?

This, by far, is one of the most tragic posts I have ever read. And yet, I laughed, which is surprising being that I may or may not have been just like the woman who was impregnated...??? But nevertheless, I know funny when I read it and this is some funny shit