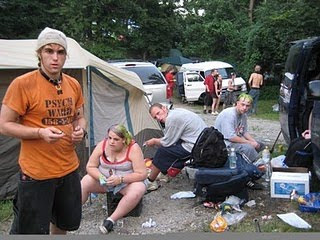 On the ground next to me was a small JanSport fanny pack. In it, on a ripped off portion of a carton of Pall Mall cigarettes, was this cryptic message. Also inside was a $25.00 check to me from someone named Miles Odenkirk with Shit Yeah, Bro written in the memo line, a Cantonese (?) dental dam, a half-eaten Nutter Butter, a classic Hardcore Rap CD and the phone number to a prominent Phoenix-area urologist.  And, perhaps most importantly, a disposable camera that included the photo to the upper left. I don't recall ever having met any of those people, but I have a distinct feeling that I know them fairly well at this point.

Labels: Miami's on the Scene Just in Case you Didn't Know it, Quid pro quo Clarice, Team Denny, Why Yes That Is A "Bottle Rocket" In My Hand

Best night of my life is always with you Denny. Sambuca is always on tap.

This is excellent by the way, but you know my favorite part was that Buffalo Bill clip. Damn, he's something.

referring to your undergarments that way makes you sound almost sedate

Beautiful. I mean, I sure thought it was. I was picking up on a bit of sarcasm in your writing though... so if you and Vodka and Ground Beef don't want to go camping with me and my friends anymore, just come right out and say so.

But, if you did truly enjoy our miraculous evening of magical emotional journeys, then I'd be all for doing it again sometime soon. (I thought we were supposed to keep this a secret, so I posted that I was on vacation over on my blog) Anyhow, just let me know. My life is forever changed.

Call me a Twihard with a mild to severely moderate dutch-clogging fetish, but this just might be my favorite DD post ever.

Denny, it's safe to say that you're the Cult Jam to my Lisa Lisa.

For serious this time.

Serves you right for going on a date with Susi Spice!!!!

clogs, the bitter step-sister of crocs.

i just dozed off a bit thinking about nekkid Robert Patinson wearing a fanny pack. of course, i was trying to visualize you.

@Blunty: You can't spell frustrated without "us."

@B: Can I also be the Cult to your Ian Astbury?

@Doc Cyn: I'm always up for Wiccan camp outs with you and O'Donnell.

@Good Nurse: You saying undergarments makes me decidedly not sedate.