Take The Wheel, Jason Motte: "What About Me, Alyssa Milano?" 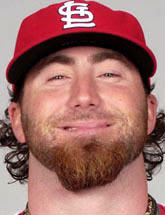 Eds. Note: This is the eighth installment of our ongoing series of guest appearances by cultural heavyweights.

That's quite alright. I'm used to it by now.

I suppose average Americans not wedded to Sabermetrics may not be following me all that closely--especially the average Americans who are hot, willing T.V. stars with supple, Alpine breasts, a well-toned flank and a smile that could light up Busch Stadium in January.

Don't get me wrong, I score my share of road tail simply by virtue of the fact that I'm usually within shouting distance of Albert Pujols in the hotel bar. Ladies love Albert. I'm sort of like his roadie. And that's okay. I get my share, even if 41 Ks in 39.2 innings and a 1.11 WHIP from a 7th inning guy don't act as a floor magnet for womens' panties (if the panties were magnetized, I guess).

But the truth is, there's only one lady that Jason Motte's eyes are on right now.

What's a brother need to do to land Alyssa Milano?  Especially given her stellar track record with baseball peen.

I may not be a square-jawed Adonis, Kong-wanged All-Star curveballer, or lofty-cheekboned backstop, but I can get left handed batters out like nobody's business, grill a perfect beef tenderloin and effortlessly release the secret carnality of any adult woman on the planet earth.

I'm not asking for a month-long commitment or anything old-fashioned like that. I'm not begging her to actually use the tickets and complimentary in-game massage I've been leaving for her at will call for every road Dodgers, Angels, Giants, Padres and A's series since 2007. And I won't implore her to respond to the roughly 2,500 texts I've sent her since spring training.

She is, quite simply, the anti-slumpbuster.

And I just want her to give a boy a chance. Perhaps a pleasant early dinner at The Ivy followed by a romantic stroll around Beverly Hills capped with a Tantric lovemaking session in her pool cabana after letting her beat me in Scrabble. J-Motts would sex her so right.

Labels: Charmed, No Chance In Fucking Hell, Pulling A Motte, Wait A Week, Yeah But What Are Your Splits In The 8th Against Righties?

Aargh! I looked at the photo of Sting in the bath with his rubber duckies and now it's burned on to my retinas

Apologies. I should have used one of the dozens I have of myself in the same place.

Assuming we can equate ERA to penis size, he should use that as a pickup line.

@Slinky: I think it is in the MLB Rulebook's preamble, along with the number of times that a player is allowed to reposition his junk during a game.