From The Bag Of Tricks: A Very Special Boy (Advance #13) 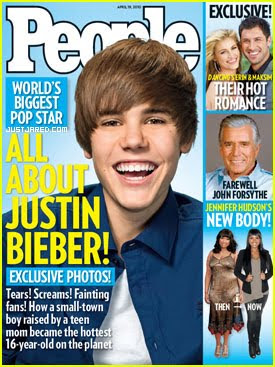 How a culture treats its most vulnerable speaks volumes about it.

In ancient Rome, the mentally befeebled were made the unwilling subjects of cruel, humiliating bloodsport.

In the early days of our nation, these ersatz citizens were forced to endure isolated lives in dank, sexless institutions.

And not until the1970s were our schools and workplaces beginning to meaningfully accommodate the "less unchallenged" among us.

So imagine the pride I felt when I learned that a plucky little moppet---one who might have, in a darker time, served as a shoeless oarsman working for 11 cents a week and nourished on a diet of wild dewberries and rainwater--had become a bona fide pop sensation.

There was once a day when bumping John Forsythe's death from a featured position on the cover of People would have been unthinkable.  That day has passed.

And somewhere, another special someone is smiling.

That kid is a prick...a Canadian prick at that...

Have you no respect for the dead?

A friend's daughter calls him Justin Beaver. I dare you to look at him the same way after hearing that.

ps. Of course William is smiling. It's the only facial expression he has...

i have no idea who this kid is.

but damn, i'm itching to know where jennifer hudson bought that new body

That Welcome Back Kotter photo is seriously scary

@Blunty: Denny hooked her up.

@Vodka: That sounds better in the abstract.

@Good Nurse: Denny wanted to be Barbarino as a child. And he largely got his wish.

Denny likes him some Huddy.