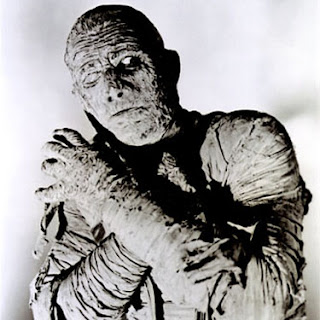 After staying entombed in the Saharan hinterlands for almost 5,000 years, musty Egyptian oligarch Imhotep has suddenly thrown his hat in the geo-political ring, boldly suggesting today that President Hosni Mubarak should step down as Egypt's leader, possibly allowing the erstwhile high priest of the Sun God Ra to slowly shuffle back to his well worn seat at the right hand of the Pharaoh.

"Many of us on the Cairo political sidelines are hoping against hope that our leader will yield to both the polity and Babi, the Baboon God of Death and Virility, by abdicating his high station and. . . well, whatever the hell comes next. I'm not exactly motherfucking Hemsut, am I?  But I'd heed the people's call if need be," said the still decomposing, power-famished Cannibal of the Sands.

Although Imhotep had privately suggested to opposition leaders that a forced embalming and fire-fueled burnt offering to Anubus--the jackal deity of death and the underworld--might fit the bill, the bandage-addled Carapace of the Dead has toned down his rhetoric to a place where a simple Mubarak resignation on a half-pension would be sufficient to satiate the undead beast's preternatural bloodlust.

Brendan Fraser, believed to be on the set of his new Sanford & Son reboot, was unable to be reached for a comment as of press time.

Labels: And Karloff Wept, Babi Me, Like A G-6, Wait Do They Have A Lot Of Oil?

Fred or Lamont? Which one will Brendan play? I can't wait.

My word verification was "corse" very close to "corpse"

I'd move to Egypt simply to further the cause of Imhotep in this endeavor. Thank you for bringing this to our attention fine sir.

Imhotep would be a terrible president. He had his brain pulled out through his nose! However, I did hear he has some excellent ideas for policies regarding campaign finance reform.

can we further discuss the depressing realities of the world over a chilled box of wine, some mesquite bbq chix and a questionable massage?

What do the Bangles have to say?

Personally, I can't walk like an Egyptian. I'm on my pyramid.

@Blunty: No question about a DelVecchi-ssage.

I saw Brendan Fraser on an informercial the other night. He´s the new spokesperson for the "Slap Chop".

puh-lease, so typical of an ancient egyptian mummy! You make mystical threats, all the while proposing political innovations and reform, which in reality are a far cry to the pile of dung your fecal administration will dish out every fiscal year.

Someone puh-LEASE nominate a candidate who doesn't smell like a bandaged pile of charlatan sh** who has concrete, realistic, and all the while achievable goals.

@Vodka: My face is in your heart.

@B: He's looking a bit like a mummy himself.

@Leila: Denny will see what he can do. My influence in the Middle East isn't what it used to be.