Spoiler Alert #6: The Planet Of The Apes 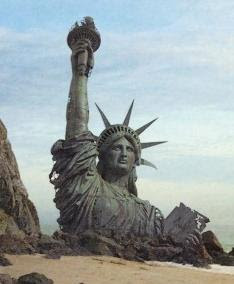 One of the first romantic comedies that I ever saw, this simian masterpiece is best known for a shocking reveal at the end of its third act that people are still buzzing about forty years later:

The apes had built an exact scale model replica of the upper half of the Statue of Liberty on their sinister troglodyte-helmed planet.

I think I can speak for all of us when I say that we never saw that twisted masterstoke coming.

Labels: 1940s Special Effects, Busby Berkeley Is All Over This, I'm Not A Damn Dirty Ape, Leave Marky Mark Out Of This

Delvecchio you're the magnificent bastard.

Meaning that you don't know your father and you are a fantastic human being.

I knew my father, but I am magnificent.