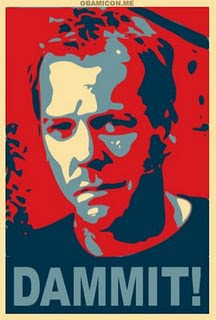 Eds. Note: This is the fifth installment of our ongoing series of guest appearances by cultural heavyweights.

WE'RE RUNNING OUT OF TIME.

Truer words have never been uttered, and the freedom haters at Fox are making the wrong call by turning my clever catchphrase into a sad marching order that's going to put tens of thousands of innocent women and children in danger.

But I will proceed stoically as I ride off into the dark nether regions of our cultural awareness, where I will once again hoist my gravelly, morally superior indignation at the likes of Cheng Zhi, Marwan, The Dawn Brigade Separatists, and that three-faced sperm sponge Nina Myers.

I spit on your grave, Harlot. Or at least on the grave that you're purported to be buried in even though you're surely alive and engaging in some high stakes anthrax deal with bloodthirsty Somalian rebels in the basement of a seedy Bucharest disco.

And don't even get me started on our favorite wanton power-slut, Sherry Palmer. You're probably giving her a ridiculous blabber show now, eh, Rupert?

Seriously, Murdoch, can you put that whiskey sour down, look me in the eye and tell me the same network that parades dancing bonobos, wife-swapping dickwads and transsexual trailer park escorts in front of America has the moral authority to cancel the very show that has put your illegitimate grandchildren through the finest dual-sex military schools in eastern Australia?  That's what I thought.

Oh to have seven minutes with you in CTU Interrogation Room #3 with the cameras off and me so engorged with rage that I could, literally, force a towel down your throat until you gurgle to me whatever I want to hear. Why yes, I can get you some new undergarments. After you tell me who ordered the attack.

And what of the children?

An entire generation of American youth have suckled at the ample teet of my patriotic bravado so they can know right from wrong, good from bad, and when to electrocute a bound, 17 year old non-English speaking underling to within an inch of his life without so much as getting a time out. Uncle Jack knows, child. Uncle Jack knows.

So I want to say a breathy goodbye to all of my friends.  Don't cry for Jack Bauer.  He'll be just fine. Chloe is three months pregnant with her second son.  And my informant tells me that he's going to be called Jack.

All My Best,
Jack Bauer
Posted by Denny DelVecchio at 4:39 PM

Labels: Four Episodes Left: Where The Hell is Aaron Pierce?, This Accelerates Cuthbert's Descent into Softcore Doesn't it?, What? No Mention of Tony Almeida?, You're in Good Hands With Allstate

meh. this season rots as bad as the last one.

quite honestly, the show has sucked since season 5.

but i did sort of like the crack about the three-faced sperm sponge nina.

I'm not pregnant with Jack's baby. It's actually Cole's. Awkward.

The wife is starting to get on my nerves because of her obsession over Jack's "affair", the daughter is covering for the damn degenerate kidnapper who is secretly banging whores and Palmer's dumb son has an audio recording that he's going to do god knows what with.

It's all stressing me out very much. LOL. I should go watch a puppy and kittens show on Animal Planet.

Only on Season 1? There's still time to get out.

But I bet that you don't.